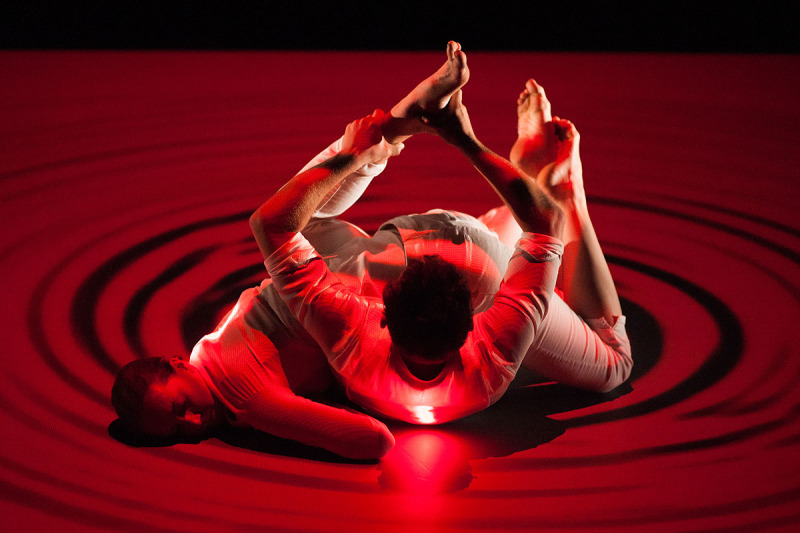 Live performance is a powerful medium through which to communicate concepts and ideas. The strength of performance, particularly contemporary dance performance, lies in the potential for visual and aural (ie non-verbal) communication, which transcends nationality and age. This kind of performance is particularly well suited to conveying ideas that seem abstract or occur on different scales – in time or space – which are often difficult to conceptualise within the context of our daily lives. In this regard visual performance is a compelling way for scientists to connect with the public about their research.

The core scientific idea behind the work was to communicate how tiny changes at the molecular level can have major global consequences. To give a contemporary example of this, it is thought that two or three changes to a surface protein of avian flu might be enough to cause a global pandemic by allowing the mutated flu to transmit between humans. The performance was able to traverse scales – from the molecular to the global – through the responsive visual environment that Andrews and her team created. Andrews decided to harness the relatively cheap but breathtakingly effective method of using infrared digital cameras (XBox Kinect) to track movements in space and combine this data with video projections on the floor beneath the dancers’ feet that reacted and responded to their movements. Using this projected light we were able to create a range of abstract environments from cells within a body to cities on the globe. Light was also used as a metaphor for infection, such that dancers could catch flickering shadowy infections from one another, allowing the audience to visually track the spread of the disease. Birch’s choreography also explored the different scales and proximities of infection: sections of movement were inspired by the chemical bonds which form between the molecules of a host and parasite, other sections captured the everyday human interactions which provide the backdrop for the transmission of infections.

The sound world of the performance played an important role in conveying shifts in scale and mood, while also providing aural reference points for
the audience to allow them to place scenes in our everyday world through recordings of airports and cafes. Hughes’ music compositions were part pre- recorded and part generated live during the performance. These interactive elements were made possible by wireless sensor technology developed by Madgwick and Mitchell. These small sensors, embedded in bespoke padded harnesses (designed by Andrews to be worn invisibly under the dancers’ costumes) allowed small specific movements to trigger snippets of recorded sound or music. The embedded sensors also allowed us to measure the  proximity of dancers so that the volume of sound increased in relation to how physically close dancers became. The interactive sound and video elements were intertwined using bespoke software coded by Tew and Mitchell, and combined together to give the performance a powerful and immediate sense of cause and effect: our actions have consequences but by changing our behaviour we can affect the outcome.

After each performance we opened the performance space up to the audience so that they could experience for themselves the triggered light and sound installation: How being in close proximity to an ‘infected’ person could result in ‘catching’ the light-infection and create a map of the infection network; How getting closer together or moving more could be heard in the responsive generated sounds. Our audiences told us that this opportunity to embody the installation enhanced their understanding of the performance and comprehension of the scientific ideas underpinning the work. It made the audience “part of the work” (audience quote).

Audience feedback suggested that the performances engaged with new audiences both in terms of the science and the dance: those without a science background were drawn to see the work by the dance content, whilst people who hadn’t seen live contemporary dance before were initially attracted to the work by the scientific content. Both groups were surprised and interested by their exposure to the other element. The balance of movement and technology allowed the creative team to construct powerful metaphors for scientific concepts but as one audience member put it, “the nice thing about the science was that it wasn’t in your face – it was supporting, perfect”. Through performance therefore the science communication can be almost subconscious, to again quote audience members: “Brilliant! [The performance] makes something not normally interesting [to me] more accessible” and “[the performance] drew me into science, which I would normally avoid.”

TRANSMISSION was made possible by grants from Arts Council England and the Wellcome Trust Centre for Chronic Diseases and Disorders, and support from Heslington Studios, Falmouth University, DARE and the University of York.

Professor Mike Brockhurst is the 50th Anniversary Chair of Evolutionary Biology in the Department of Biology. His research investigates the causes and consequences of rapid evolution by microbes particularly in the context of human infections.

Becs Andrews is an artist and stage designer based in Leeds and is currently a Visiting Research Associate in the Department of Music where she is developing interdisciplinary projects with scientists and musicians. She was previously DARE Cultural Fellow at the University of Leeds where projects included Phase Revival: An Optical Harmonica and Gold Dust: Of Memory and Light.